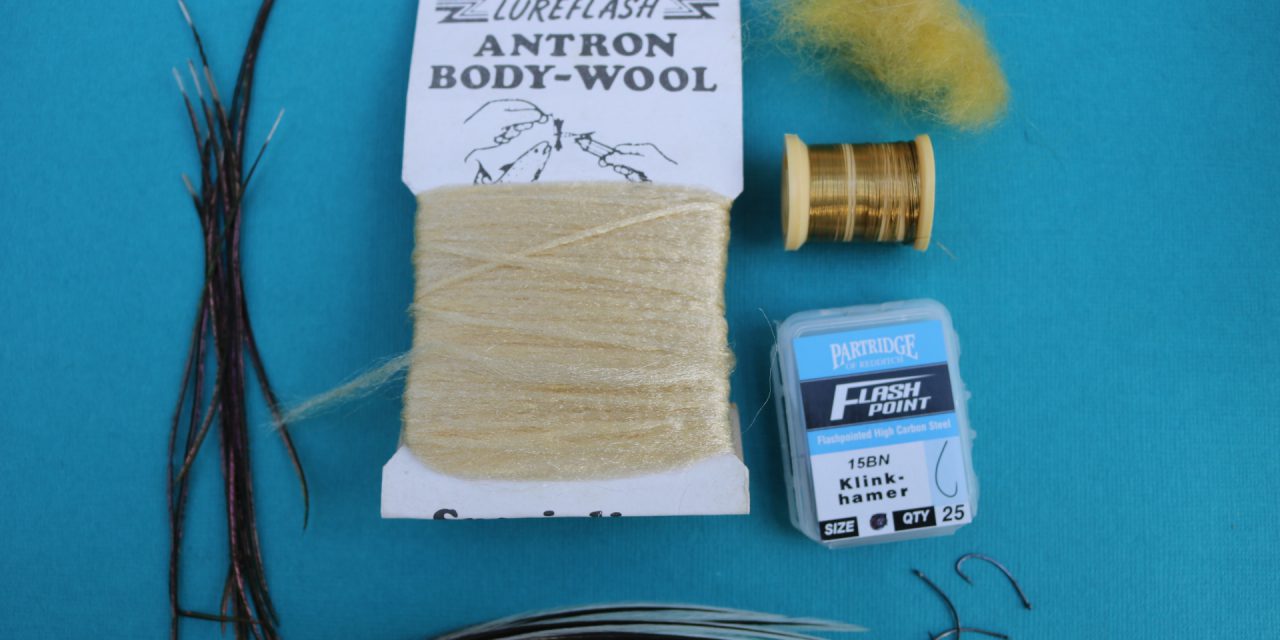 The materials needed for the Klinkhamer

Probably one of the finest grayling emergers ever, this fly was invented by the now retired Dutch Army officer, Hans Van Klinken.
However this parachute emerger is one of the most misunderstood and badly tied flies in commercial catalogues.

Hans tied his original flies on large curved hooks and improved the way the fly sat in the water by putting a slight bend in the front part of the shank behind the eye to allow the wing post to stand vertically while the body hung down at a 45 degree angle. This hook is now available as the Partridge Klinkhamer Extreme
Since then everyone has come up with versions of the Klinkhamer and there are some awful examples around.
Here are a few points to ponder before you buy or tie some Klinkhamers.

1) This is not meant to be a small fly. It was originally tied in sizes 8 and 10 and is intended to represent a large emerging sedge or caddis. It is also designed for rough water. For the UK rivers and stillwaters, it is probably better to tie an emerger in the Klinhamer style rather than imitate this large heavy water fly.

2) The body is sparsely dressed and steeply tapered to allow it to sink beneath the film. A heavy dressed body will not sink to the correct angle and while the fly will probably still catch fish, it is not anywhere near as effective if the body is not fully sunk.

3) The dark thorax (usually peacock herl) is an integral part of the fly. Flies tied with lighter thoraxes again may catch fish but are missing the point. 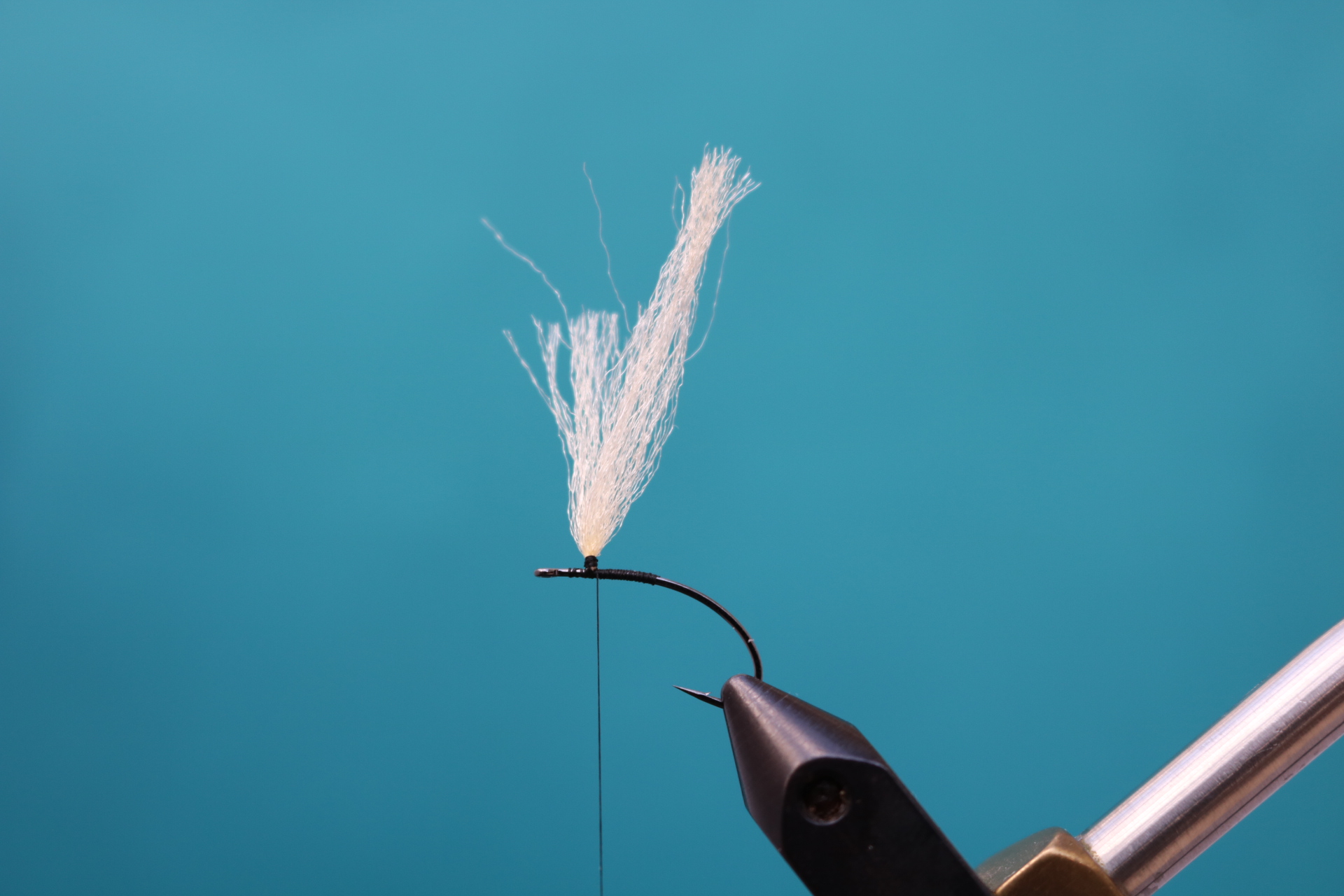 ( 1 )  Insert hook in the vice and cover with tying thread. tie in a length of Antron yarn to form a wing post and secure in an upright position . I always tie wing posts with a double length of yarn and leave the ends at different lengths . More of this later. Seciure the post with half a dozen wraps of thread around the base. 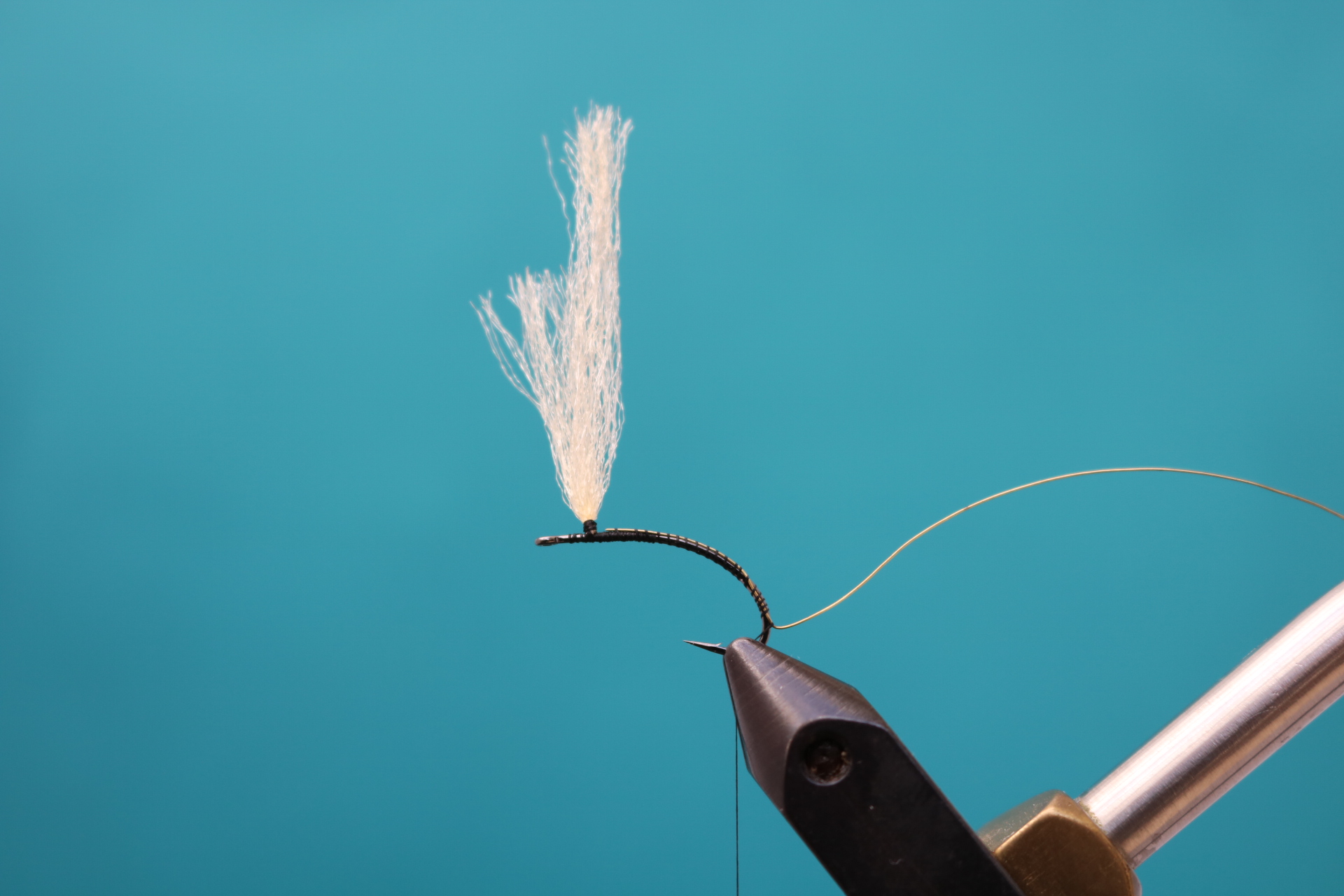 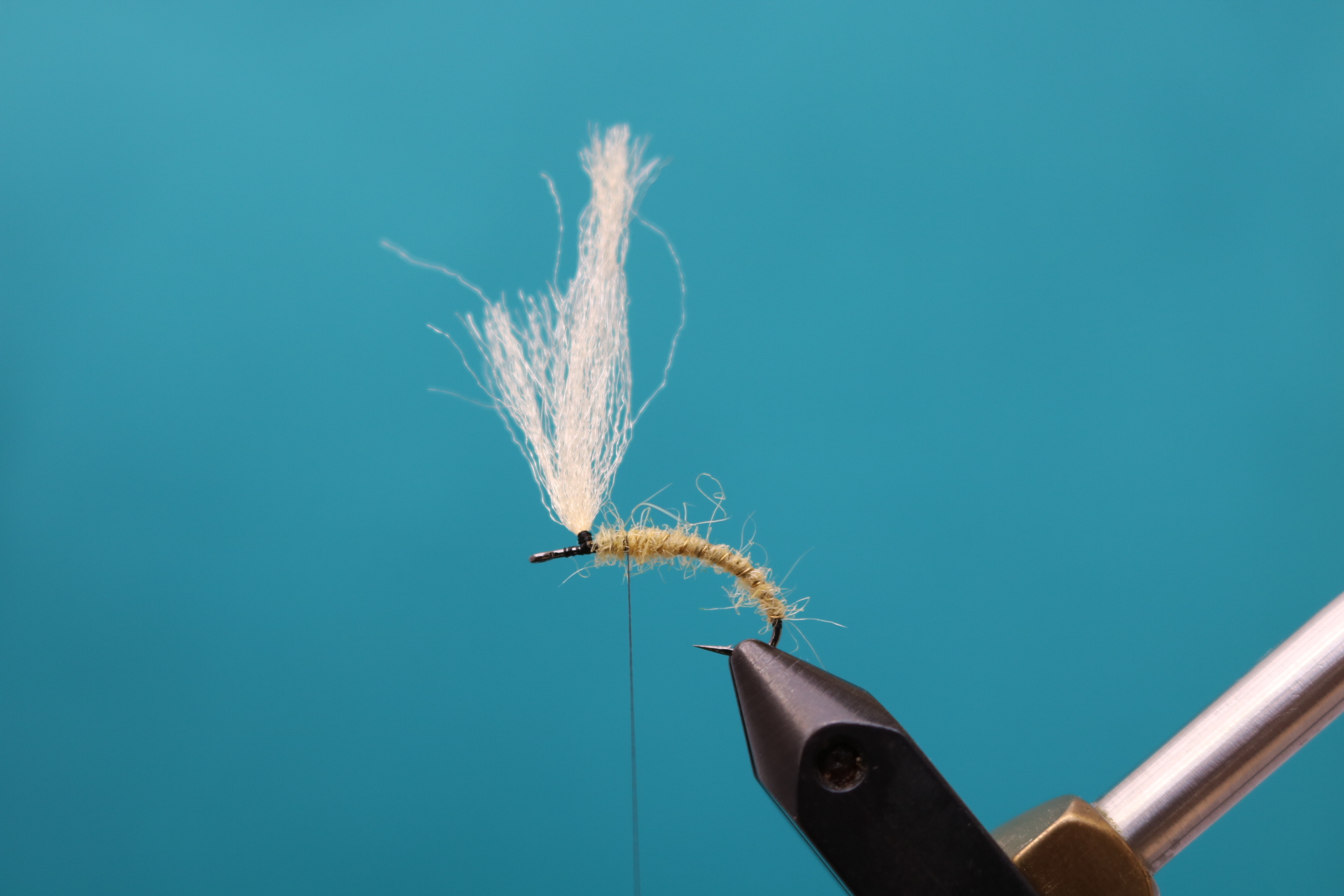 ( 3 )  Dub a body of seal’s fur, choose the colour to match the natural insects . Here I’ve used cream to match mayflies. Bring the rib forwards in open turns. Ensure the body is compact otherwise it will not sink quickly and may hold the fly at a strange angle 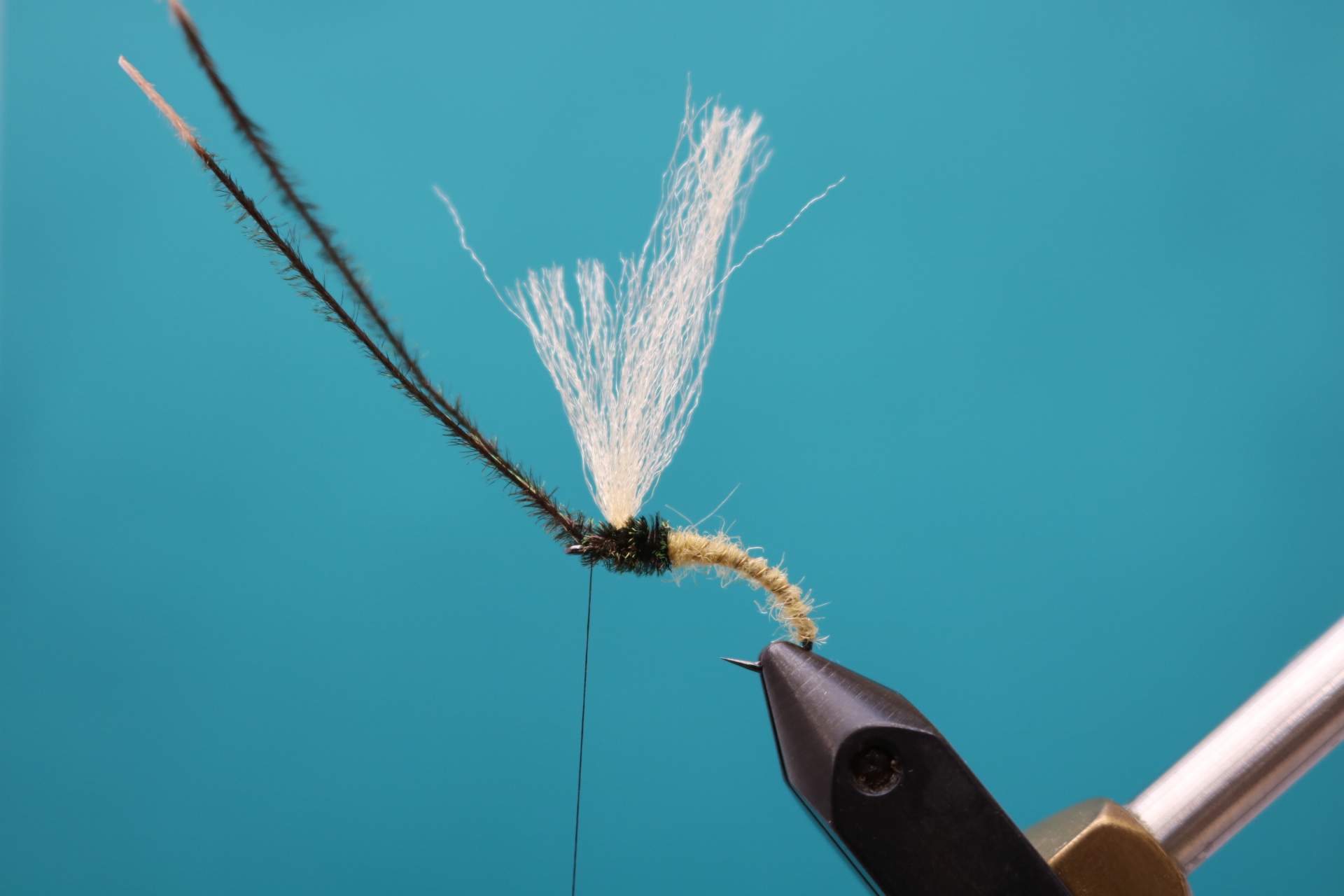 ( 4 ) Trim the tips from 2 pieces of good quality peacock herl. Tie in and wrap around the wing post and tie off at the head. Ensure you get a good coverage of the thorax area. Try to handle the peacock as little as possible. This helps the fibres to stand out more and gives the impression of a thicker thorax. Remove excess and whip finish at the eye. 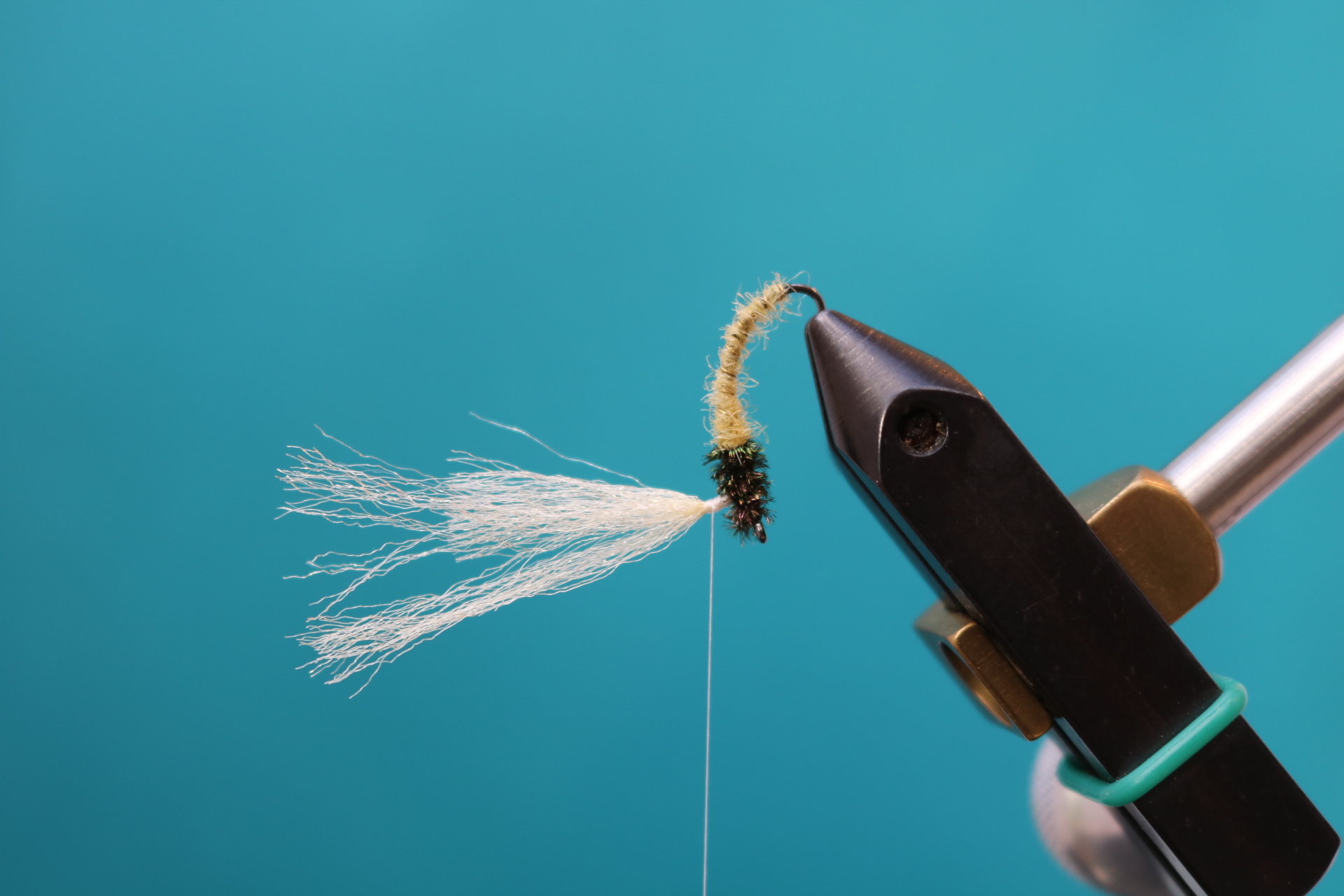 ( 5 )  Remove the hook from the vice and replace with the eye facing downwards and the wing post in the horizontal plane. Start the 12/0 tying thread and make a few turns at the base of the wing post to strengthen it. you should be able to hang the bobbin off the wing post. 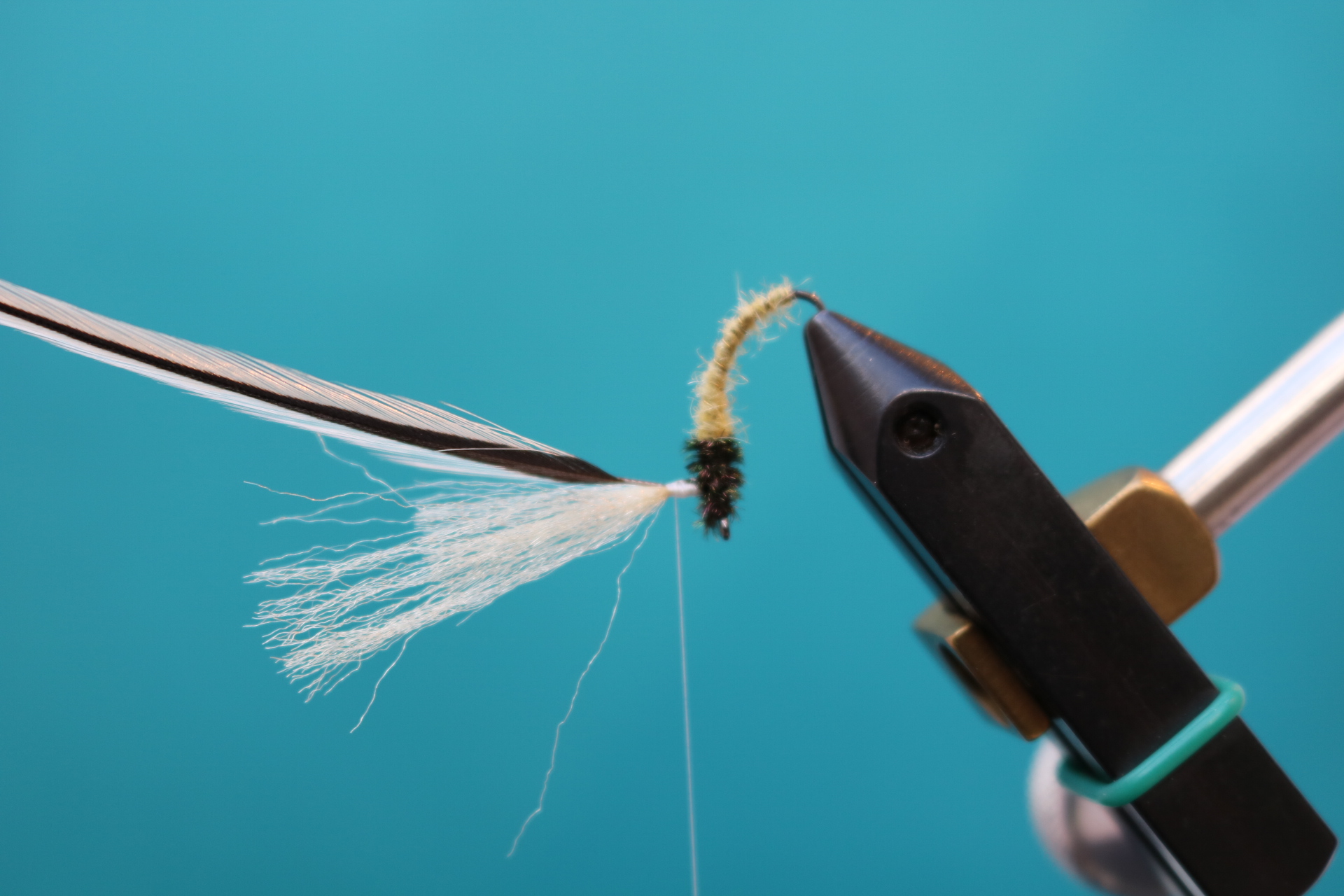 ( 6 )  Choose a well marked badger hackle that is one size larger than would be normally used. Strip the end fibres from a saddle hackle and tie in  by the stalk. Ensure it is tied in up to the top of the thread base and that the good side is facing downwards. This will give the hackle a “cupping” effect when wrapped. When stripping the fibres determine which side will come into contact with the wing post first when wrapped. Remove 10 to 15 extra fibres on this side. this will ensure a neater hackle. 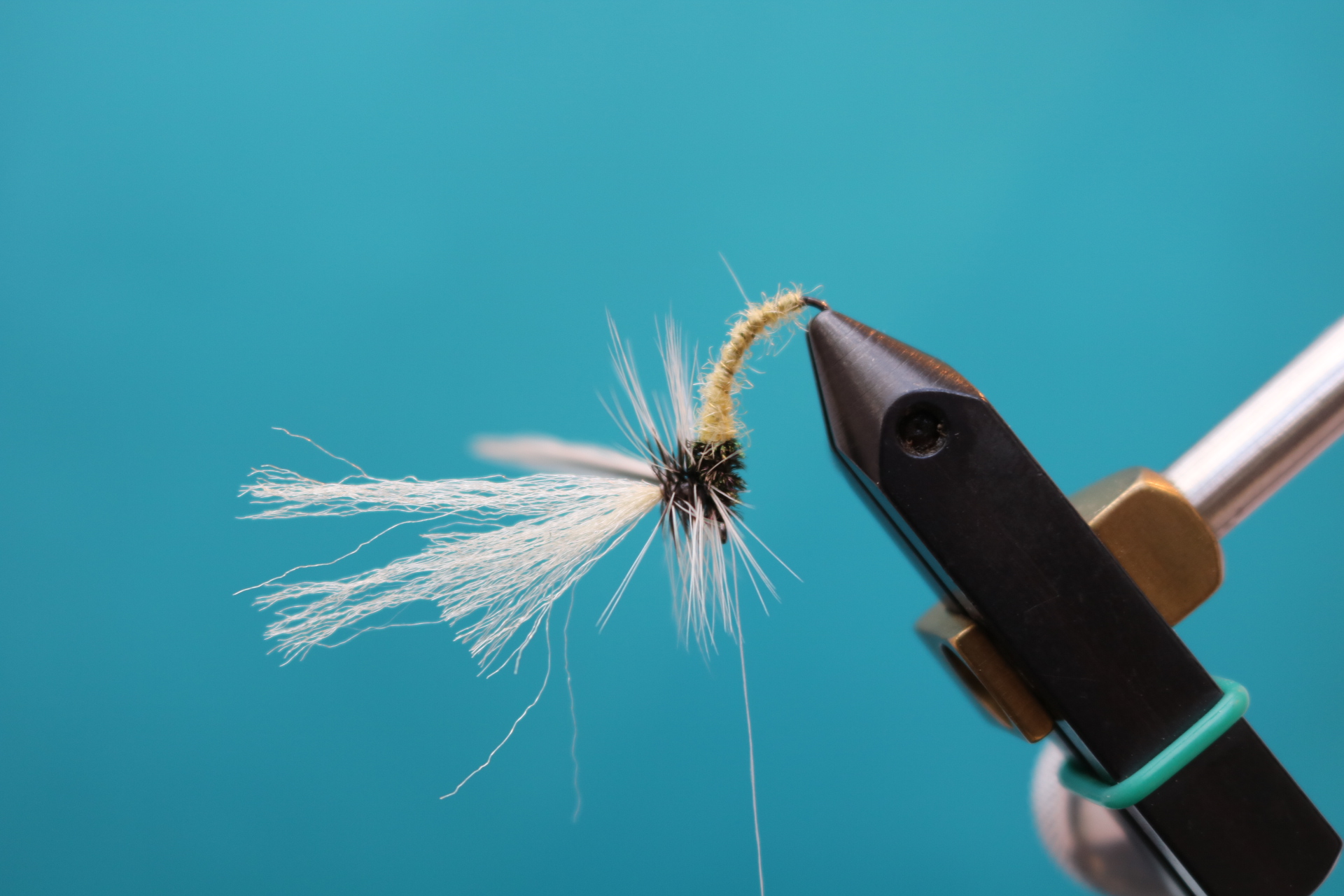 ( 7 )  Wrap the hackle down the wing post. At least 5 turns are recommended. Ensure each turn lies below the previous one. Secure the hackle. At this stage you can take the two uneven ends of the wing post and pull apart, thus compacting the hackle and forcing it down towards the hook. 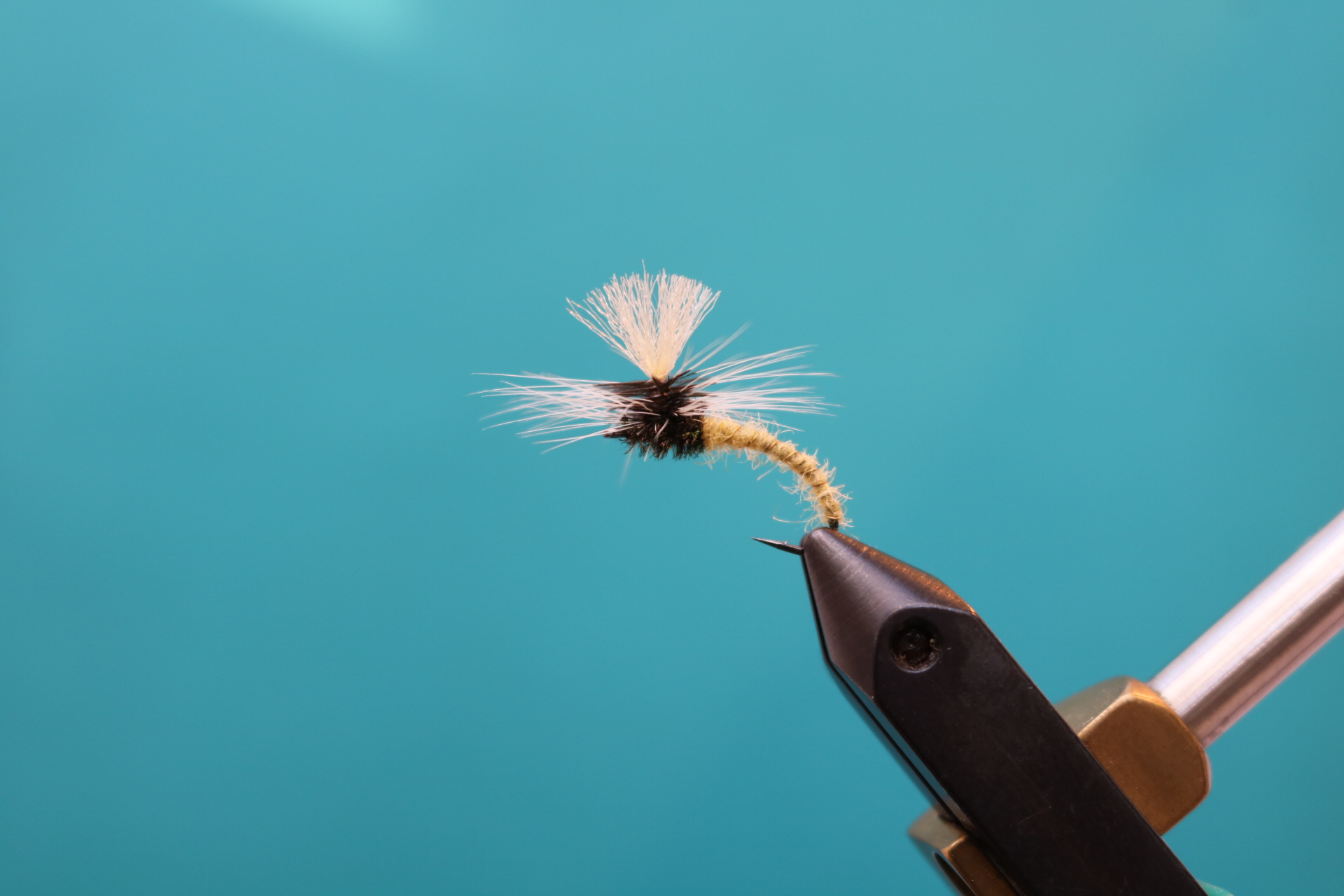 ( 8 )  Whip finish below the hackle and trim off any stray fibres. Add a small drop of varnish to the whip finish.  Change the colour of the body and hackle to match the hatch, you can go down a few sizes but for flies smaller than 14’s I believe there are much better emerger patterns.  Change the colour of the wing post to suit the light conditions where you fish. Fluorescent Yellow, Orange and Pink stand out well against dark backgrounds whereas a black post will show up on bright water. 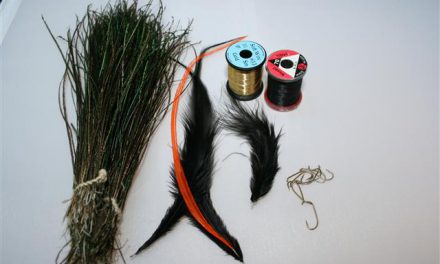