The First Lady of Fly Tying Helen Elizabeth Shaw recalled spotting her first trout at the age of three as “love at first sight”. Often accompanying her father on fishing journeys, the important relationship of the fly fisherman to his tackle would inspire the young Shaw to quickly learn the trade of the vise. With no formal guides or training, Shaw began by mimicking the work of local tiers near her Wisconsin home. Her inherent ability in this very precise art would have her busily filling orders for local anglers long before her high school graduation.
In the mid 1930’s, Shaw’s reputation and talents allowed her to collaborate with tackle retailer Art Kade of Sheboygan. Respecting Shaw’s considerable skills, Kade allowed her to explore her knowledge of entomology to produce not only exceptional classic wet and dry trout flies, but brilliant deer hair bodied flies of her own design that would entice the most intimidating bass.
During the years of operation at Art Kade Fly Crafters, only a single 1938 catalog was put into print. Though their records show anglers ordering stock as late as 1950, the singly published volume served as the only retail guide to the company’s merchandise. Admirers and researchers of Shaw’s early work agree unanimously that every fly sold from the retailer was solely tied by Shaw herself.
During Shaw’s career, there were only two periods were she halted her production of flies. During World War II, Helen answered her patriotic duty by volunteering with the U.S. Army Auxiliary Corp. Though she rose in rank to 2nd lieutenant, she desperately missed her trade, and returned to tying full time at the first sign of the conflict’s end.
In 1952, Arthur Kade succumbed to a long illness. A passionate conservationist and founding member of the Izaak Walton League, Kade’s ideals influenced Shaw throughout her life. His enthusiasm for the art of angling reaching far beyond his passing through Shaw. 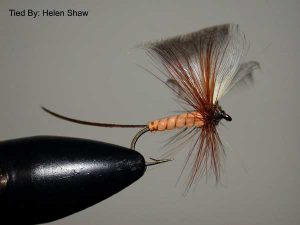 By the time Shaw opened her own studio in Sheboygan, her reputation had reached the vast majority of the fly fishing community nation wide, whose visiting anglers would greet her near the open waters of the Wisconsin fishing grounds.
One such instance was a chance meeting with the acting art director for Field and Stream magazine, Hermann Kessler. The courtship between the two artists would include love letters from Kessler with Shaw’s responses including unique flies that included many of her most beloved examples. Once married to Kessler, Shaw relocated to New York.
Hermann’s connection with Field and Stream exposed Shaw’s work not only to the magazine’s considerable readership, but to the prestigious Anglers’ Club of New York. Shaw could not have found a more appreciative audience of her fly tying abilities. People such as Alfred Miller (Sparse Grey Hackle), A.J. McClane, and many of the most highly respected sporting artists such as Lynn Bogue Hunt, would forge friendships that spanned her lifetime. Shaw supplied flies to the who’s who of fly fishing and sporting celebrities, including notable personalities such as President Herbert Hoover and Norman Rockwell.
Shaw and Kessler were able to combine their considerable talents by creating volumes of fly tying literature that would demystify the process to any willing learner and catapult fly tying into a hobby for all to enjoy. Fly Tying was first published in 1963. Shaw’s easily understood text book technique combined with Kessler’s photos, broke through the complications of previous fly tying publications.
It was Kessler’s brainchild to illustrate the book with photos by capturing each stage during the tying process. The pair concluded that the life sized images would earn the favor of their readers, a theory proven with the book’s initial success. From novice to advanced, any tier could easily reference their steps by placing their own hands and vise to mimic that of those in the book. Fly Tying was issued time and again to meet the constant public demand. Only slight improvements were added to the book each printing. The volume stands as the definitive text book on the art of tying to this day.
In 1989 Kessler and Shaw published another book on the art of tying titled Flies for Fish and Fishermen. Utilizing the same methods of their first successful volume decades before, Shaw provided step by step instructions for wet fly tying. Her husband again photographed her vise work, as well as color plates and silhouettes of each fly. 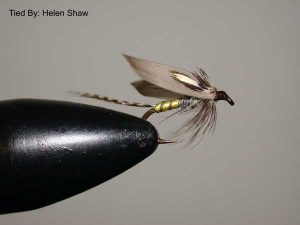 The success of the couple’s second book inspired them to produce yet a third, unfinished volume. But in 1993, Hermann Kessler passed away. Understandably grief stricken, Shaw would never again tie a fly.
Shaw’s accolades continued throughout her life. From becoming the first female member of the Chicago based “Crack ‘O Dawn” club, to luncheons in her honor by the Angler’s Club of New York, to numerous awards from fly fishing organizations throughout the country.
One of her most treasured compliments came from a recipient of her flies. Arnold Gingrich, founder of Esquire magazine and ardent fly fisherman, when gifted a set of 100 Helen Shaw tied flies to celebrate the magazine’s 50th birthday, he tearfully said “I never had a Helen Shaw fly, now I have a hundred. Nobody’s worth that much.” It was he who dubbed her the “First Lady of Fly Tying”.
Living somewhat of a reclusive life in her later years, Shaw’s correspondence was saved for a very few. Despite repeated requests for her flies, she chose to live out her time focusing only on those close to her, never to return to her beloved tying after 1993. The lack of available examples of her work, makes every fly a truly rare and important piece of history 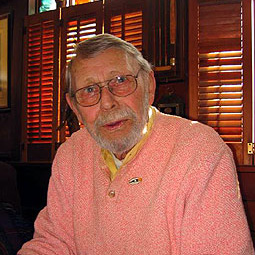 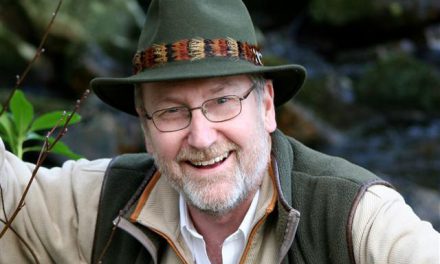